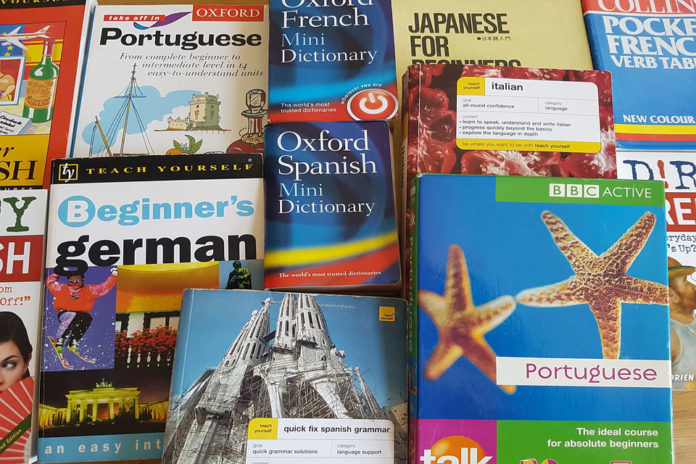 Spanish is considered the easiest language to learn by a person whose speaker’s English. The structure of grammar and sentence are different but simpler than English. Because both languages have Latin roots, they share thousands of cognates as well-words that sound the same and have the same meanings. So let’s see easy was to learn Spanish.

How to learn Spanish

Place Notes Around the House to learn Spanish

One of the fun ways to learn Spanish vocabulary is to placing notes around the house naming items in you. First, you need to go through some textbooks and find words you like.then buy a sticky note pad and begin your house labeling. Yes, place a note stating “nevera” on the refrigerator, place small “naranja” notes in the fruit bowl. When you go about your daily routine, you will learn the language without even thinking about it.

You can sit down and listen to someone who speaks Spanish. You can do this by finding music videos, films, news clips, or commentary on sports using the internet. Find something you’re interested in and just play a tiny section.

Write down what you think you’ve heard, listen to the Spanish. Write down the overall idea of what was said, don’t go for a word to word translation. Start tiny and then go to a longer part of the clip. Do not hesitate as many times as you need to replay the video.

Verify that your answer was right after you’ve completed writing down what’s been said. If the video has subtitles, you can do that readily. If not, you might also need to write down the Spanish and break down your own translation. I would suggest that you stick to videos with subtitles for your first few times.

While Spanish classes aren’t a bad way to learn Spanish, they certainly aren’t my first option; you want to know a language. But it is a more costly method for learning Spanish if you’re not already in high school or college.

​ A major issue with traditional language courses is that they generally concentrate on rules of grammar and lists of vocabulary.  They tend to teach language rather than as a skill as a sequence of facts.  Imagine someone teaching you about a bicycle’s components, how it works, and how you’re riding it.  You have to get on a bike and ride it at the end of the day if you want to know how to ride a bicycle.

But in classes provide the Spanish learner with the framework.  You are not in charge of what material the course covers when you take a Spanish class. What we have to do is just show up and work with what you are given.  You are accountable for everything in other more autonomous types of Spanish teaching. You need to decide what to study when to proceed, what to do, and how to review.  Everything left to the teacher and the curriculum in a school.

Excellent educators can create a Spanish class or break it. An otherwise boring and complicated topic can be taken by a superb educator and turned into something exciting and understandable. It is essential to remember, however, that excellent educators are hard to come by.

Getting a grip on proper Spanish sounding is essential to doing it in the first place. When I learned Spanish, I thought it would only help. well, my pronunciation to get the near-native pronunciation. But I was mistaken.

You’re actually turning your ear to Spanish sounds in the process of having ideal pronunciation. So you can hear the distinction, for example, between the Spanish “a” and the English “a.”

In this manner, the right sounds await your ears, which is compulsory if you want to be able to comprehend individuals that speaking quickly.

Tv is a wonderful way to learn Spanish and enhance your ability to listen and understand. You can begin by discovering your favorite genre on Netflix and pop on the Spanish subtitles. Hearing the audio and seeing the subtitles visually will help you learn the word context. If necessary, do not hesitate to stop the episode or move to the English subtitles.

A fun and engaging way to learn Spanish is the best part of these shows. The shows are enjoyable and are very addictive. Not only will you remember more, but you will also be able to apply and practice your Spanish with each episode. Soon, you’ll find yourself shouting on Spanish TV when your favorite character makes a poor life choice!

Japanese language students use comics and manga to learn the language all the time, providing the learner with a fast perspective of the language as well as the culture. If it works to learn Japanese, it will definitely work to learn Spanish as well.

There is a wide variety of comics out there, so it shouldn’t be an issue to find one to peak your interest. I would do a tad bit of studies on the origin personally, just so before reading, I had some background understanding. This will assist you to comprehend the humour a little more quickly, particularly if you choose a political comic.